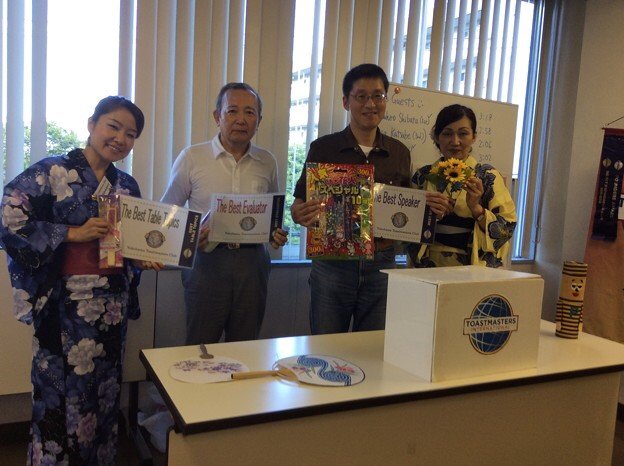 Dearest all officers and members

First af all, Thank you END_OF_DOCUMENT_TOKEN_TO_BE_REPLACED

The YTMC #573 meeting was held on June 7th at Seishonen-ikusei Kaikan.

After the officers election, the meeting control was passed to today’s TMOD, KT(‘me’!). Today’s my meeting theme is “Rainy Season”. As I hate the rainy season,
I had asked all role takers ‘how do you enjoy rainy season?’ All role takes gave me very unique idea and good advisements to enjoy the rainy days.
For example, in rainy season, someone said that he will enjoy watch World Cup Soccer game, and someone said that he will visit Kamakura area as middle of Jun is the best season for fireflies watching in Kamakura area. That was sound great !

Today’s Table Topic Master was TM S.I. At first, he showed one scene from cartoon film. Then, he gave us some questions about our imagination of next story and next scene of the cartoon film. It was a very new and unique way for all members!

After that, we had 3 speech sessions. One of the speakers, TM T.Y gave us his speech about how to get DTM award! He showed 2 DTM award plates and explained about his effort and episode about them. Through his speech, we all knew and learned how difficult it is and how much he did hard work during his Toastmasters club activities.

At the evaluation session, TM T.S gave us a great feedback to each role takers even it was a short time. Also, today’s Gracho, TM T.M, gave us sound advices.
It is not easy to find the mistakes of grammar and use of sentences but he pointed out those errors and explained us correctly. Thank you for giving us advicements!!

Although today’s agenda was a tight schedule, all role takers conducted their roles on time. In today’s meeting, one of our new members, TM M.F took his first role as Vote Counter, and he did a great job without any issue, congratulation!

We will have a #574 regular meeting on June 21th @Yoshino-cho Plaza Meeting Room (http://www.yaf.or.jp/yoshino/access.html) See you then!!

The YTMC ♯572 meeting hold on May 24th at Hatobakaikan

In this time we hold the meeting at the different week, because previous week was District conference. Due to very irregular schedule, relatively less member could participate in this meeting. Then we felt little bit difficult to assign each role.
But, despite such a difficult situation, we could carried out this session by cooperating with each other. TM S undertook double roles , as a speaker and an evaluator. I’m sure this was really tough challenge for him. But he delivered very humorous and inspirational and humorous speech. And he also gained best evaluator award！He made rally good job!!
And TM N take took charge of sudden role as supporter (Vote counter).
Other speakers preformed very well with their original and informative speeches.
With many voluntary cooperation of each member, we could achieve this meeting very successfully. I ‘d like to say many thanks for all members as TMOD!!

Dear All Members of Yokohama TMC, and All friends of TMs,

Hello, it is my pleasure that we, YTMC got Perfect 10 DCP Points!

It was long long journey, but, I have confidence that all officers and members kept supporting others, and kept laughing.

I love this atmosphere, and I hope all members keep it.

The YTMC #571 meeting held on May 3rd at Seishonen-ikusei Kaikan. The day,
May 3rd was in the middle of Golden Week and also the International Costume Procession Festival was held on the main streets in Yokohama. So the street along our way of the venue was very busy with spectators to see the cheerful scene.

The meeting started at 14:00 in a joyous mood with 10 guests. We were first planning to have an induction ceremony for 2 persons, but happily 3 persons
in the end. How gorgeous we had the meeting with 3 new members !
On top of that, one of them made a speech, “Ice Break Speech.”

The theme of the meeting: What’s your one more step forward in TM ?
I think a member joins this club to be a better speaker, but we don’t have any teachers. So we support one another by making a speech, evaluating a speech or taking any roles including an officer’s role to serve members and the club, that is, we learn by doing. Every member is asked to act one more step.

The meeting was a regular one with Table Topic and 4 Prepared- Speakers.
At the topic session, the theme was timely, “Golden Week”. All speeches were
great and full of variety.

And an officer’s election for the next term is close at hand, so that we had
a special session by nomination committee. The title was “ What is club officers ?”
Each current officer introduced his/her responsibility and role explanation.
They inspired members to become a candidate for the next officer.
On June 7th we will have an election.

The meeting was very vivid, fantastic and a full program.

What is club officers?

Our 570th meeting was held on April 19th at Hatoba Kaikan. After we had a wonderful walk under the beautiful sun, we started the meeting at 14:20:-).
It was so nice to have 5 guests, and surprisingly, 4 were non-Toastmasters!

The meeting started with VPE R.K.(acting President)’s opening remarks, and
he smoothly passed the baton to the Toastmaster of the Day (TMOD, me!).

Because each members have their own goals of what they want to achieve in Toastmaster activities, I decided to have this theme “I AM A TOASTMASTER!”
I asked all role takers how they would describe Toastmaster in 1 word. We were able to learn different perspectives that we wouldn’t come up by your own. FRIENDS, POIZON, CROSSROAD, TESTING etc… I liked SODA the best!

I, TM T.S., was so pleased to take the TMOD’s role before our Officers’ election.
It was a great opportunity to rediscover what we can benefit from both Competent Communication and Competent Leadership programs. We practiced public speaking in our regular session (Joke, Tips, Table Topic, Prepared Speeches, and Evaluation), and also we practiced building leadership skills in Workshop session which was based on Successful Leader series, hosted by TM T.Y.. In this workshop, we were able to learn the Club Officers ‘ duties and discuss the effective way to operate our club.

I think the best part of TMOD is that you can do whatever you want (to the extent that it does not interfere with the members’ welfare)! For instance, you can assign 3 Evaluators for 1 Speaker (lucky Speaker TM O.M.). But again, no matter how you plan the meeting, it is always important that the meeting agenda is tailored to the members’ benefit. I was so glad that my meeting was successfully adjourned, everybody being happy to be there.

Thank you all for joining the meeting.

The meeting was held at Bankoku-Bashi Kaikan on April 5.

I was very happy that three newer members took their first roles. TM AS took her first joke master role. She spoke a nice black joke on some wife who made a severe decision for her husband. TM OM and TM TN took their first evaluation roles. Even though they both were assigned to evaluate advanced communicator speeches, they did good jobs.

Members enjoyed various kinds of speeches on the day. TM GM made a speech for the purpose of motivating people to take action that is an English version of his Area Japanese speech contest. TM AI made a speech on his frightening experience on some night that made him think about the existence of a ghost. TM SI made the best use of IT technology to explain the web pages that help our club activities and the importance of keeping in touch with them.

I as a toastmaster, could introduce each speaker with topics that are related with spring getting a lot of interesting answers to my question in advance. On a table topic session, each speaker made a nice speech on spring. All the members participated in the meeting with enthusiasm. Thanks to such the positive atmosphere, I enjoyed taking the toastmaster role and learned a lot of new things from everything in the meeting.

I was convinced again that Yokohama TMC gives us a lot of learning experiences through the great fun.

He was TMOD and the word of the day! How “dramatic”!

Meeting#568 was successful and finished mostly on time with 14 members and 5 guests at our home Venue Hatoba Kaikan.

We had four prepared speakers who were all skillful performers. They delivered quite organized and meaningful speeches, so we were not only enjoying them, but also learned a lot form them. They showed us how to harmonize body language with speech and to emphasize their objectives.

Evaluation session was also to be a good lecture for us. Evaluators gave speakers around three positive feedbacks and pointed out their challenging points to level up to next stage.

Table Topic Theme was “About color” relating to the day’s Theme, so it was smooth for speakers to answer. Table topic Master who was TM A.T. had very good job because he assigned variety types of speakers, so we had a chance of listening to different impromptu speech manners.

TM S.M. took the role of Evaluator for the first time though, she did good job and advised challenging point to her speaker who spoke rather flat. TM A.S. also did good job. She was Gracho of the day, the word of the day was “Rekindle” which quite suited yearly end. She corrected several grammatical errors. TM T.Y. kindly took the role of GE even though I asked him at mid night of the day. He evaluated whole meeting and gave us several room of improvements.

Although It was the very first time for me to taking the role of TMOD that I thought it was one of tough roles before, I could finished my role, I’d like to say thank you to all members who supported and encouraged me.

the word of the day was “Rekindle”

TMOD for the first time!

The meeting was held at Hatoba Kaikan in Kannai where it is our club’s primary venue.

With the opening remarks by VPE, the meeting started on time and a guest was introduced. He was a native speaker living in Yokohama and was very interested in our club.

At the business session, the participation to Area 42 speech contest was encouraged.

Then, the induction ceremony of TM T.S. was held, and he used to be a key member of our club, and came back to our club again. Every members welcomed his return to our club.

I conducted the meeting as TMOD and the theme was “Spring has come”. Word of the Day was “Commencement” or “Commence”. It was a timely selection of word.

TM T.N. conducted Table Topics session for the first time, and 5 questions about Sochi Winter Olympic were also timely topics since the Olympic games were just over last month. Then, three speakers delivered speeches and one of them practiced it for the Area 42 contest.

The meeting was finished on time, and the time management was well done.
All in all, the meeting was successful and fun. I would like to say “Thank you” to everyone.

TT Master for the first time!